How To Hunt Rabbits Without Dogs

Rabbit hunting is definitely a pastime best enjoyed with a baying pack of brush-crashing beagles, but don’t stay home just because you lack a pack of hounds or enough high-tech gear to make storm trooper jealous.

You can go as Spartan and alone as a Jedi and still find success working the thickets on foot with a trusty scattergun cradled in your arm or sitting a brush-surrounded field edge in the evening with a tack-driving .22. Best of all, most rabbit seasons run through the much of the rest of winter, providing an abundance of excuses to get outside and hunt rather than sit lazily around the house.

Rabbits prefer areas where thick cover and ample food are in close proximity so target brush-choked borders or thickets adjacent to open crops of soybean, peanut and peas or even food plots lush with clover, turnips or overrun with broadleaf weeds. All of these hot food/shelter combo locations will hold cottontails. So too will briar patches and thickets tangled with honeysuckle, blackberries and blueberries. Even better are overgrown ditches and hedgerows that when pushed, will offer some of the easiest shooting if they run through open field where rabbits will dash into plain site when trying to flee. 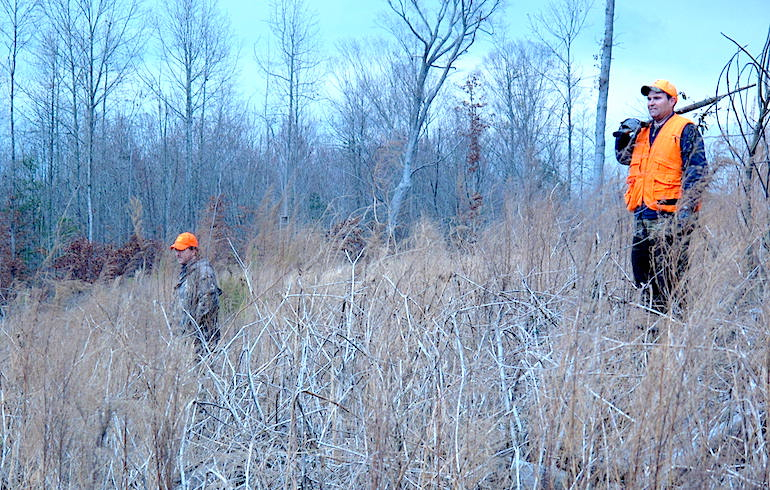 Preferably, you want to work cover no taller than your waist and that offers abundant gaps or open areas among the cover where rabbits must run to escape. The open areas make it easier to spot and shoot at bounding bunnies. But you’d better be ready. Keep your shotgun at ready arms and step into the thickest, nastiest stuff you see and zigzag through it stomping around and altering your pace. Stop, speed up and stop again to keep rabbits unsure of what you’re doing and where you will go next. Walk 10 to 12 steps, pause for as long as 20 seconds, then alter your direction, sometimes even doubling back through the same cover as rabbits will sometimes sit tight on the first pass. Keep alert and ready as when one darts from cover, it will do so quickly and you’ll only have a few seconds to aim and shoot.

This is why a shotgun is absolutely the only choice for this type of hunting. And while the trusty 12 gauge will certainly do the trick, lighten your load and opt for a 20-gauge shotgun or even a .410. Both are more lightweight and compact for extended carrying and snap shooting, and both possess more than adequate payload for the light skin of a rabbit. Favorite 20-gauge loads include Winchester’s Super X in No. 6 or 7½ shot.

May the Force Be with Two

When hunting with a partner or two, rather than simply posting a guy at the edge of cover while the other tromps around, work a more staggered drive. Spread out about 20 to 30 yards apart. One guy should slowly move ahead through the brush, zigzagging as if alone, but always looping back toward his partner. Pause once 15 to 20 yards away and let the other hunter work his way up. If there are other hunters, each should do the same. As one hunter is moving, the other(s) should be ready to shoot. Kick and jump on really thick brush to spook out tight-sitting rabbits. When working a hedgerow, simply flank both sides of it and move forward in the same staggered approach, kicking and stomping the cover to flush a target to your partner.

Revenge of the Sit

Not into testing your skin’s resilience against a bunch of tangled briars or frustrated by rabbits that bolt from tight cover to tight cover never offering a clear shot. Then grab a comfy folding chair and shooting stick and set up on the edge of a small food plot or field bordered with heavy cover right up to the edge. Then as the last hour of daylight approaches, watch for cottontails to slip from cover to feed and chase each other around in the open. A scoped .22 is perfect for this and Winchester has at least eight .22 LR offerings in their Super-X and Dynapoint lines ideal for the task. Another great rabbit caliber is the .22 Win. Mag.