150 Years of Celebrating Things we Hunters Like to Celebrate

As Winchester celebrates its 150th Anniversary, it’s pretty impressive to look back and see all the advancements, technology, and growth Winchester has experienced over this span.

However, there’s one thing I am confident that has stayed the same through all 150 years. Dog has always been man’s (or woman’s) best friend. We may baby our pets a little more now than they did 150 years ago, but I can promise you that love and loyalty toward our furry friends has never changed.

For me, I never honestly thought there would be a possibility of having a pet. I travel so much that I can’t even keep plants alive, let alone a dog. After some long thought I decided…too bad. I wanted a dog of my own and a travel companion – so along came my new hunting partner, Pork Chop. 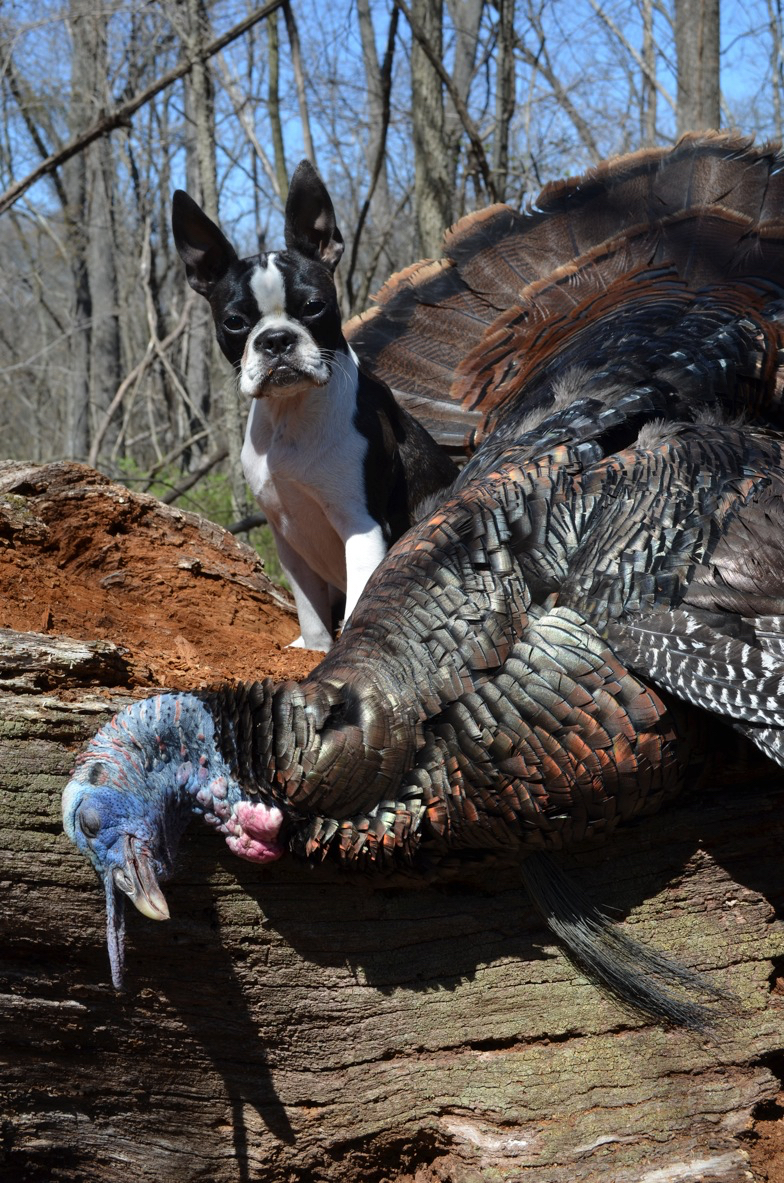 After having her for only two weeks she had already been on a hog and deer hunt in Texas, and out to South Dakota for a late season whitetail hunt. She has traveled all across the US for hunts, trade shows, meetings, you name it she’s been there and she’s only 6-months old! As spring was getting near I was trying hard to decide if she could really accompany me on a turkey hunt. This was a totally different ballgame than a deer or hog hunt. Turkeys make noise and most dogs I’d assume wouldn’t sit still with that kind of show taking place only a few feet away.

I decided this was a challenge I’d like to try. My first step was calling state DNR officials to see where Pork Chop could and couldn’t join me in the blind. Once this was established I had to get her used to me calling. This didn’t take long and soon she could care less when she heard a turkey call. This was progress, but the next part I thought was going to be tricky. How on earth would I get her to stay calm for a turkey gobbling? Well as an editor, this was easy. She sits on my lap all day while I edit shows so I put together a couple turkey tips and let her hear a gobble over and over. She watched the screen, heard the noise, and after awhile this was no big deal once again.

Now for the real test – turkey hunting time. Illinois was going to be her first turkey hunting experience and I’d be lying if I said I wasn’t a little nervous. The mornings were cold and because I treat her more like a baby than a dog, I carried her out to the blind in her blanket, created a nice little nest on the floor of the ground blind, and even brought a heater to keep her nice and warm. As the sun started to rise and the gobbles sounded off non-stop not a single movement from Pork Chop. As mid morning started to approach an entire flock of turkeys was coming in from behind the blind. I could hear the toms drumming and spitting and immediately my heart was pounding. As I looked out the side window I saw 5 strutters coming my way and only a few yards from the corner of the blind.

Unfortunately, this was something I didn’t think of. The sound of the birds spitting and drumming was something little miss Pork Chop had never heard and went nuts. She started growling, barking, and caused every one of these toms to shock gobble followed by a mad dash out of the area. Frustrated, I made it clear that this was not ok and she seemed to get the hint. After feeling like our hunt was ruined, I looked up and saw 3 new gobblers coming into the decoys offering a second chance. This time she sat perfectly still, and I was able to shoot a beautiful long beard at 15-yards with Longbeard XR in a 3.5 inch 5 shot. To me, Longbeard is one of the more exciting innovations Winchester has developed through the years. The good thing about Pork Chop is the sound of a gun to her is super exciting because she knows we get to run out of the blind to see and smell something new. It was truly a rollercoaster of emotions. I was just happy it all worked out. I gave Pork Chop a wing feather and she thought it was the best toy in the world. We took pictures, laughed, played in the field and I’m pretty sure she was enjoying the entire experience as much as me.

Hunting has always been something I truly enjoy, but its fun to try new things. Watching the excitement on someone else’s face when it all works out…even if it is a 10lb puppy! Sharing the photos, making people smile, and getting kids to want to try hunting has always been one of my top goals and in my opinion, Pork Chop is just one more way to show people another side of hunting.