A good turkey talker should be like some politicians: able to talk out of both sides of their mouth. This is just a figure of speech, but now that I have your attention, maybe you should try a little double talk for turkeys.

As every turkey hunter knows, talking to tom is half the battle. Millions of dollars and hours have been spent trying to improve humans’ ability to talk turkey. Box calls, slate calls, scratch calls, wing calls, diaphragm calls, straw calls — you name it, turkey hunters have tried it. But they’ve rarely doubled up.

The problem with solo calling is that toms don’t always fall for a lone voice shouting in the wilderness. Sometimes they’re looking for a double date or a big party. So offer it to them. 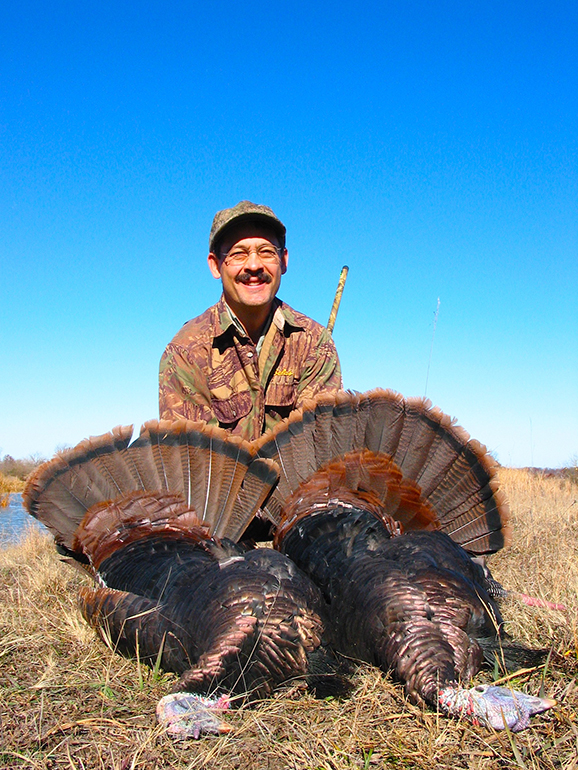 Double calling can be done by two hunters at once, which is fairly common, or by one caller, which is harder. To double call solo you’ll need to train to use more than once calling device at once. I find the easiest way is with a diaphragm in my mouth and a box or friction call in my hand. Each instrument throws a slightly different pitch, and if you’re coordinated, you can even combine different rhythms. Yelp yelp yelp and cluck cluuuuck cluuuuck or purrrr purrr purrrr.

Another option is to run two friction calls simultaneously. I’m not fond of this because it forces me to keep both hands off my gun. This isn’t the kiss of defeat. It’s quite possible to reach for the gun after your quarry is close but before he’s in view. Or, do like my friend Kirt. He grabs his gun off the ground, aims and fires in one smooth, fast motion. Works for him.

The critical part is teaching yourself to use two calls at once. For most of us that isn’t easy, but hide in a sound-proof room and give it a try. I think you’ll be surprised at how quickly you pick it up. Both calls do not have to be perfect. Heck, none has to be perfect. They just have to sound something like a turkey — and lots of them.

You are welcomed to play dueling hens with back-and-forth jabbering. Or start a yelp and a second or two later come in with the second yelp, maybe a cackle or kee kee run. To sound like more than two turkeys, change pitch, too. Follow two high pitch calls with two lower ones. Change pitch with a different edge of your friction call or different mouth position with a diaphragm.