Winchester has been a leader when it comes to designing innovative new products to help hunters in the field since 1866.  Everything from the perfect ammunition for deer hunters, hog hunters, varmint hunters, and also turkey hunters.

Longbeard XR has raised the bar when it comes maximum effective range for shooting turkeys.  We all like to call them in close, but the impressive patterns experienced with Longbeard XR are truly unbelievable.  Featuring brand new Shot-Lok technology, Long Beard XR has given turkey hunters the tightest patterns and longest shot capability of any lead load in history.

In fact there are twice as many pellets in a 10’’ circle out to 60-yards when compared to traditional lead loads.  That’s pretty impressive, and makes a huge difference on one’s confidence when taking long-range shots. 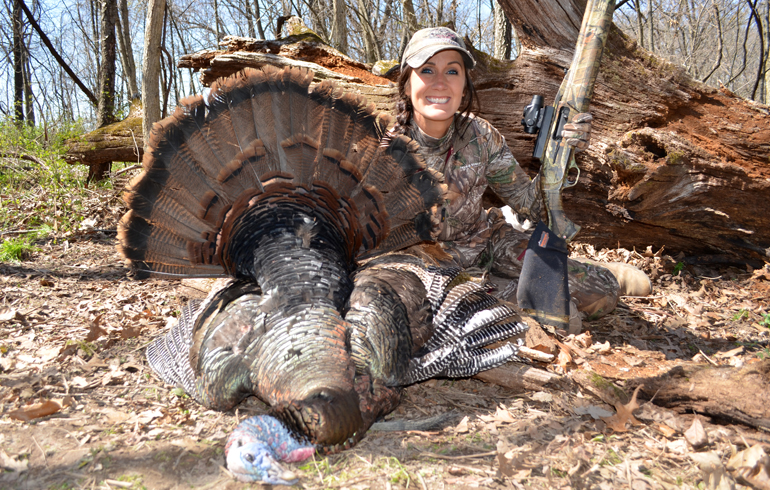 Some people may ask,  how exactly does this technology work?  As the load comes out of the barrel, the shot is held together – this is what makes the difference. The Shot-Lok technology is actually a hardened resin that encapsulates the pellets.  Once shot, the resin fractures forming a buffer, eliminating air space around the pellets.  This prevents movement, which leads to virtually no pellet deformation.  This ensures the pellets remain round, fly straighter and tighter. This results in consistent payloads and incredible knockdown power for gobblers that get hung up.  This kind of technology isn’t developed overnight.  In fact, this year marks the 150th Anniversary for Winchester, and it’s this long term dedication and constant commitment to innovation that allows hunters to keep improving our chances of filling the freezer year after year. 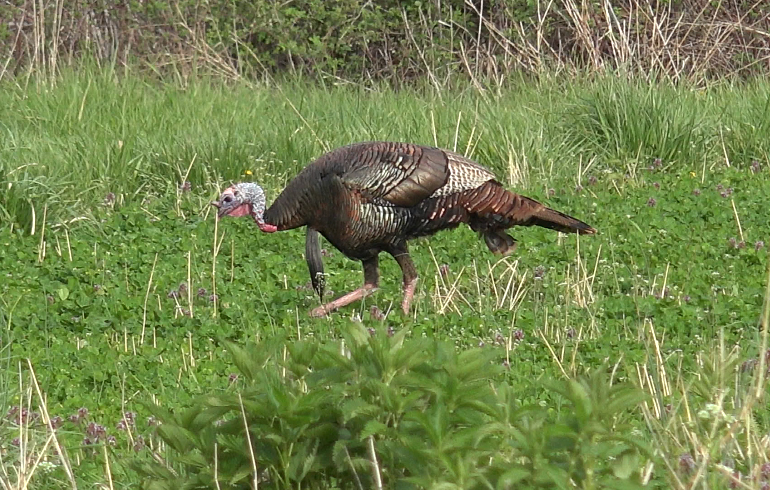 For my turkey setup I’m shooting a Winchester SX3 NWTF Cantilever Turkey Shotgun in a 12-gauge.  As for the choke, I use an Extra-Full Extended Turkey choke tube.  I’m shooting 3 1/2 inch 5 shot in Longbeard XR, and decided to top it off with a red dot.  After sighting my gun in, I decided to shoot it at a wide variety of distances to see exactly how well my pattern would hold together.  Because I want to have my patterns super accurate and am not interested in the recoil from an entire box of turkey loads, I almost always shoot using my lead sled.  This keeps me consistent and make a big difference when dialing a gun in; especially using turkey loads.  After putting in my time at my make shift range, I was truly impressed and set out for my first hunt in Illinois. 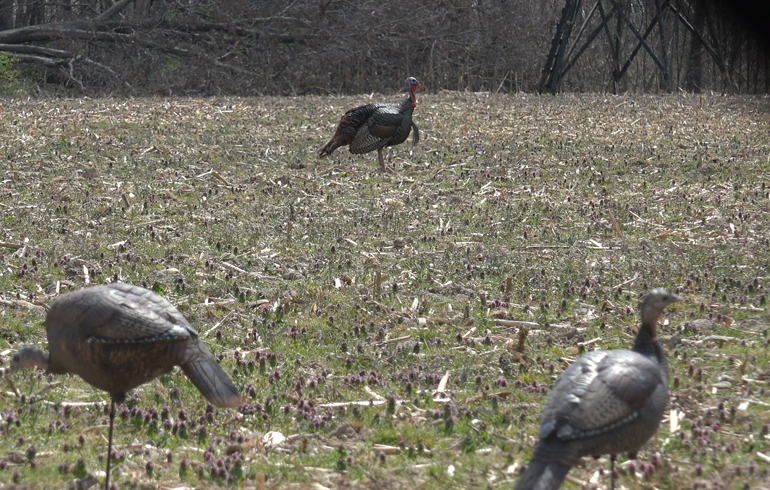 With beautiful weather and a plentiful turkey crop it wasn’t long and I had three nice gobblers that came right into the decoys.  We were setup in a ground blind and I made a great shot at 18-yards.  To fill my second tag I took out my bow and called that bird inside of 20-yards as well.  This is the ideal setup, however it doesn’t always work out that easy. With my tags filled I decided to switch roles and try to film some additional turkey hunts. 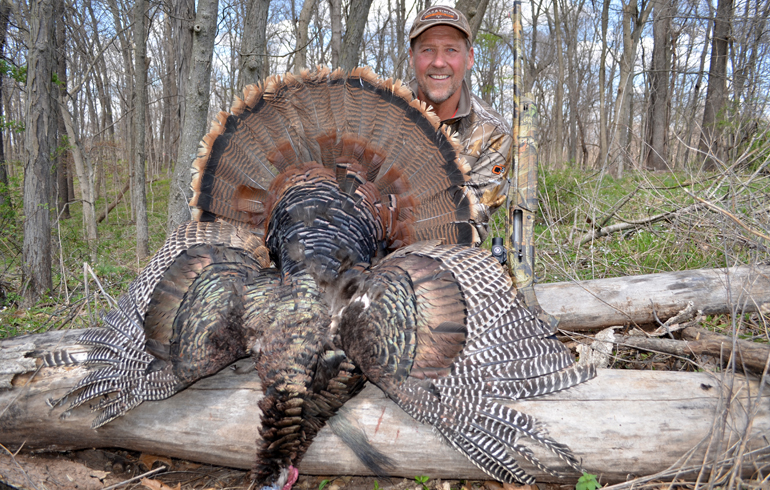 I gave my gun to Mike Pavlick, owner of Golden Triangle Whitetail where I had been hunting and set out to film his turkey hunt.  We weren’t having as much luck calling or decoying turkeys as many of the gobblers were henned up, and it was extremely difficult to pull them away from  their ladies.  In fact, with only a few minutes left before the 1:00pm cutoff we had a nice gobbler enter the field with hens.  However, he refused to come into the decoys.  He strutted around at 70-yards and simply refused to come in closer.  So with a minute before the close of season, and this gobbler standing at 69-yards Mike held right above the turkeys head and dropped this nice Tom right in his tracks.  Of course with traditional loads this would be way out of range, but Mike was setup on a tripod bog pod shooting stick, and shooting my same 3 1/2 inch 5 shot in the Longbeard XR.  Usually the fun part is calling them in close, but in this instance we were both ecstatic that it worked out perfectly, and incredibly impressed with what this gun and ammo combination can do at this distance. 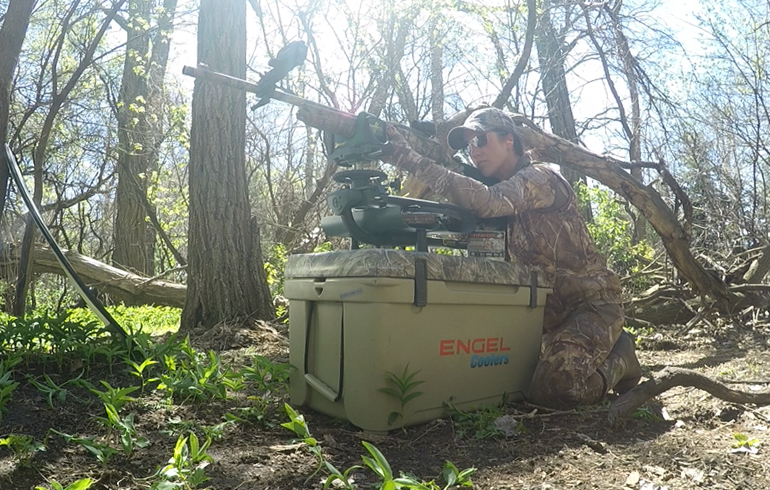 Later in the week, I filmed another big gobbler that was hung up at 72-yards.  My time was up for filming as I had an 11-hour drive to Nebraska for my turkey hunt at it was already mid-morning. With no more tricks in the bag, I filmed yet another unbelievable kill at 72-yards that was truly amazing.  These were the only two long shots taken, and both resulted in a plentiful supply of bb’s to the tom’s head.

I would never recommend taking this kind of shot if they had not put in their time at the range, but I spent a significant amount of time sighting in my gun, shooting it off the lead sled, and patterning it out to 70-yards.  Ideally I’m still a firm believer that bringing the turkeys right into your lap is better, but it sure is nice to have that long-range capability of the LongBeard XR if needed!