What to Hunt in the Summertime? Give Feral Hogs a Try

Summer may still be in full swing and some of the first real fall hunt seasons still more than a month or two (or even three) away depending on where you live. So what is an impatient hunter to do when paper targets and metal silhouettes just don’t offer the same excitement they did back in June?

Hogs, maybe just short of coyotes, are one of the most rapidly expanding species in the country, moving into new areas at a ridiculous rate. “The wild pig is the most prolific large mammal on the face of the Earth,” according to Texas A&M’s Agrilife Extension. They average between five and six pigs per little and have approximately 1.5 litters per year, though they are perfectly capable of having more litters and larger litters.

Sows can become pregnant as early as 6 to 8 months old though it is typically not until they are 13 months that they have their first litter.

While their primary range is most dense throughout the South and far West with the highest concentrations stretching from Florida to Texas and up to South Carolina, as well as throughout California, some huntable wild pig populations now exist in as many as 39 states according to the Scientific American. In California, they are managed as a game animal and require a specific tag, but in most states, they can be hunted by anyone with a license, any time of year and with no limits on how many can be harvested. Odds are, there is hog hunting available a simple trip away. 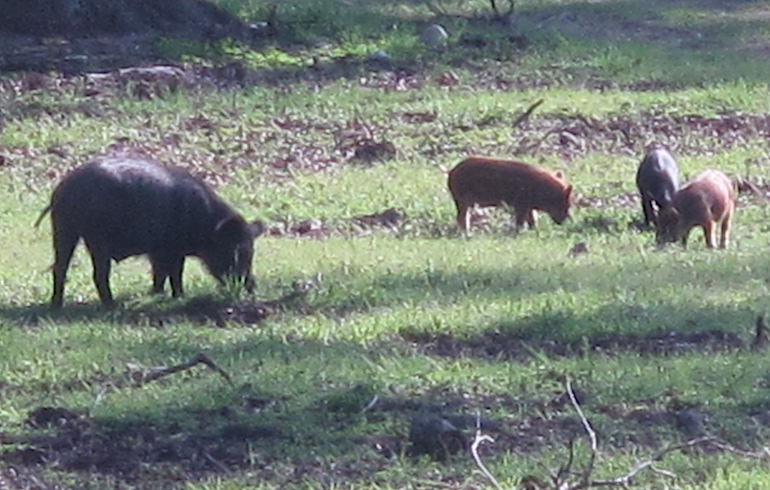 They are great to eat and can be literally tons of fun to hunt. They can actually be quite challenging. While many hunters resort to bait to draw hogs into an ambush, shoot them off a spot once or twice and that spot is done for a while. Hogs learn quickly. For most hunters, spot and stalk, glassing and finding them moving through open areas is the surest way for success.

Odds are, if you already own a firearm, you already own the perfect gun for shooting hogs. Hunters use everything from shotguns loaded with slugs or buckshot, to deer rifles, to large-bore handguns and even todays modern sporting AR. No matter what firearm you opt for, Winchester’s Razor Boar XT is designed specifically for taking down large hogs. For shotgun hunters, Razor Boar XT offers two loads with incredible knockdown power—a 12-ga., 2¾-inch hollow-point slug and the same size shell loaded with eight pellets of 00 buckshot.

For rifle hunters, the Razor Boar XT line comes in .223 Rem. for today’s most popular chambering of AR rifles, as well as popular hunting gun chamberings of .270 Win., .30-06 and .308 Win. and another tactical favorite chambering, the 7.62x39mm, common to AK-47 rifles. The XT line is also offered in .44 Rem. Mag. for handgun hunters.

Whether seeking public land opportunities (there are plenty) or a chance to hunt leased land or with a guide (there are even more), select your gun and ammo, get them dialed in and hit hog country for some first-class summer hunting fun.