When it comes to coyote hunting, there are a lot of equipment choices a person must make. I always have people ask for recommendations between using shotguns, rifles, and rimfire.

The truth is, there are certain instances where each can be incredibly helpful depending on what is most important.  I’ve created a list of benefits and attributes of each to help make the decision easy.

Shotgun- I’m a big fan of using a shotgun in areas where the coyotes have very little pressure. I recently completed one of the best coyote hunting trips I’ve ever been on in Mexico at El Chaparral Ranch.

The coyotes have very little pressure there, and we were having extremely close encounters. I wish I had brought my shotgun along! I ended up calling in 28 coyotes in a day and a half, and almost all were inside 70-yards.  Two even came a few yards from my call and it was one of the most exciting hunts I’ve been on.

This would have been an ideal setup for a shotgun as many of the shots were close and the coyotes were on the move.  We also called in numerous pairs. In this case, I find it easier to use a shotgun for a quick follow up, especially when they’re already running.  So my recommendation to use a shotgun is in low pressure, high volume areas.  In many states it’s also only legal to use shotguns while calling at night so this is another great application. 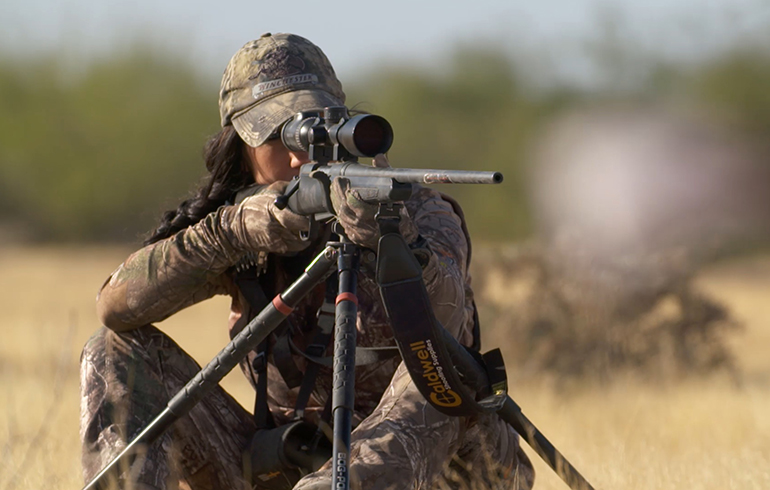 Rifle- When it comes to using a rifle, I really like using a 22-250 or a 223 paired with Varmint X ammunition in Winchester coyote light.  For me, having a lightweight gun is important because I’m usually putting on miles going from one set to the other.  Growing up, my dad would always pull us in a sled while he snowshoed from one location to the next. So, it is only natural that this is how I enjoy hunting the most now…although I haven’t started pulling Pork Chop in a sled yet! 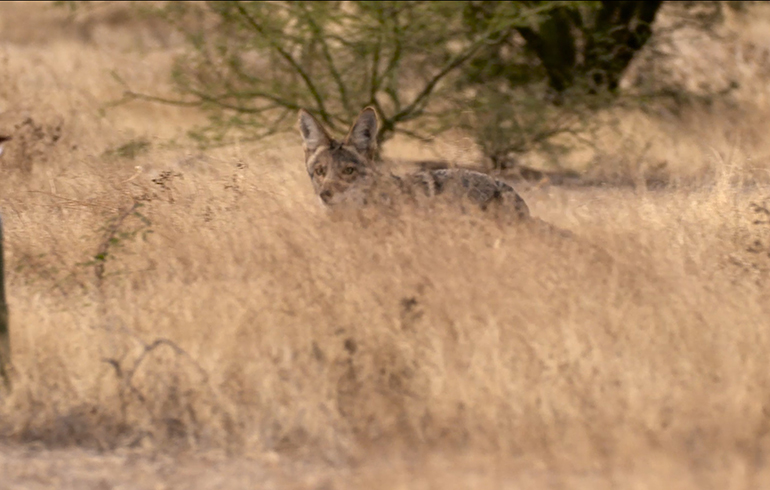 When hunting a location that has been heavily called to, I like having a rifle as some of the coyotes are very wary and seldom come all the way into the call.  I setup a pair of tripod Bog Pods, put a seat cushion down to keep me comfortable and away we go.  The Varmint X is nice because it’s built for predator hunting.  This delivers incredible knockdown power, yet minimal pelt damage which is key.  I also like to study up on the ballistics of whichever cartridge I’m using and keep the Winchester Ballistics app up on my phone.  This is a great way to quickly see what the drop will be at various distances. I especially like entering the wind drift to get an idea of how much the wind will effect various shots.

Rimfire- With the innovation in rimfire ammunition, this has become a very great option for predator hunters around the country.  The 17 Winchester Super Mag is a great new round that has really stepped up.  In fact, it’s the fastest rimfire ever created and also has less wind drift.  This means you still have the knockdown power at longer ranges, plus you get the incredible accuracy.  For predators, I prefer the 25-grain 17 WSM.  It really does a great job at distances you would never guess could be obtained by a rimfire, some out beyond 200-yards.  Best part is, you also save a few bucks in the process – so it’s a win-win.  So now you get the down-range performance of a center fire at a fraction of the cost.
Pick your coyote poison of centerfire, shotshell or rimfire ammunition,  consider the variables in front of you…then head to the fields or woods to bag a ‘yote or two.