We want to recognize Leo for his contributions to Winchester, to its historic NILO Farms hunting preserve, and to conservation and the shooting sports. Leo became manager of Winchester’s NILO Farms preserve in 1961 and carried that responsibility for the next 30 years. NILO Farms is a world-renowned hunting preserve located near Brighton, Illinois, where guests can enjoy hunting ringneck pheasants, chukar partridges, and mallard ducks, and also shoot trap, crazy quail, skeet, Riverside skeet, sporting clays, 5-stand, and the tower.

NILO has maintained an ongoing commitment to the development and demonstration of hunting preserve and game management techniques and Leo played a critical role in meeting that commitment for more than a quarter century. 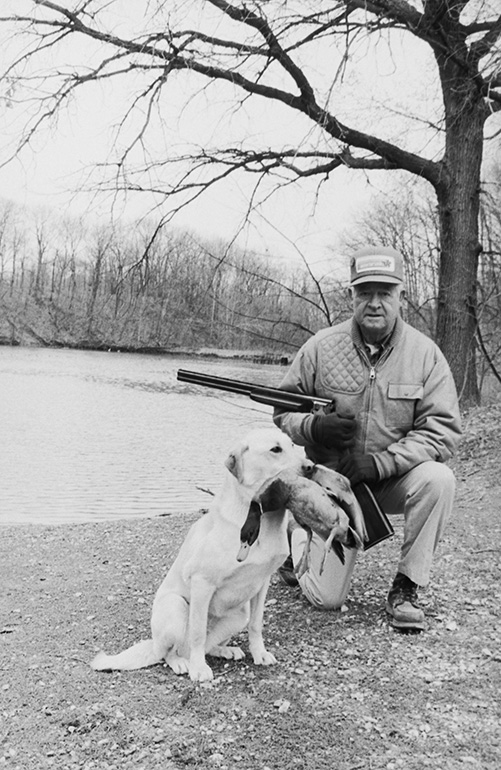 Being raised on a farm made Leo a natural fit to manage NILO Farms, where he started each day before dawn during NILO’s six-month hunting season. His daily routine was quite different when compared to those who fought rush hour traffic and worked behind a desk to earn their wages. Instead, Leo’s workplace was the outdoors.

Leo was a member of the “Greatest Generation,” having lived through the Great Depression and World War II. He developed a love for the outdoors where he went on to spend his entire career, first as a conservation agent for the Missouri Department of Conservation, and later as assistant superintendent of the Busch Wildlife Refuge at Weldon Springs, Missouri. It was during his tenure at the wildlife refuge when he made numerous friends among field trail enthusiasts.  One of those friends made a lasting impression on Leo’s life.  That friend was John M. Olin, then president of Olin-Winchester, and whose famous black Labrador, King Buck, was the national field trial champion in 1952 and 1953 and the only dog to ever appear on the federal duck stamp.

In 1961, Mr. Olin offered Leo the manager position at NILO Farms. Over the next three decades, Leo hosted thousands of guests, including captains of industry, government leaders, and celebrities from the sports and entertainment worlds. In 1974, he met a budding young professional golfer named Tom Watson, and an enduring friendship was forged. Under Leo’s expert tutelage, NILO Farms guests refined their shooting skills on the skeet and trap fields, where he would often display his mastery at hip-shooting.

Leo displayed an easy-going nature, a quiet firmness and an engaging smile. He got things done and created a relaxed atmosphere for NILO Farms guests and employees. It was his way … and although he is no longer with us, his way remains very much present today at NILO Farms.