Is There a Best Shot Size for Turkey?

Sure, there are some off brands with off-sizes, such as No. 7s or duplex loads with a mix of 4s and 6s, but generally we are talking about one of those first three when it comes to buying turkey loads.

When standing at the ammo shelf at your local gun shop trying to decide which turkey load is the best size shot, many hunters simply hedge their bets with the obvious compromise and pick No. 5s. Not a bad choice, but let’s consider what’s good and maybe not quite as good between one shot size and the other.

According to an interview of Winchester engineer Steve Meyer, by Field & Stream’s Phil Bourjaily, it takes 2 foot-pounds (ft-lbs) of energy for a pellet to penetrate a turkey’s head or vertebrae in its neck. They noted at 35 yards, with traditional lead turkey loads, nearly half of No. 6 shot failed to penetrate those vitals. But they also found that even No. 4 shot, with more than enough energy at then-accepted turkey killing ranges of 40 yards or less can glance off bone. 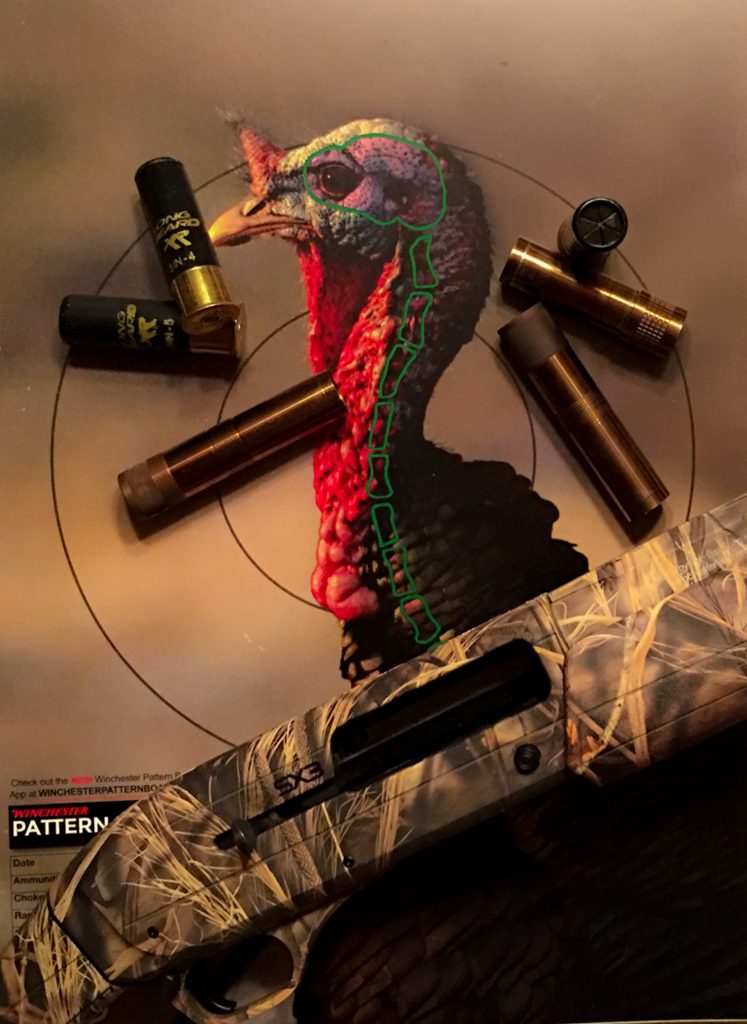 Bourjaily goes on to write, “as a rule of thumb, lead 6s are reliable to 35 yards, lead 5s to 45. Lead 4 shot retains enough energy to penetrate vitals far beyond the distance at which the pattern grows too thin to insure (sic) enough hits.” The National Wild Turkey Federation has long maintained that 40 yards is the ethical limit most turkey loads are capable of delivering reliable patterns on a turkey’s vital area.

A good rule of thumb is to lean on the simple physics of heavier shot having more mass and carrying more energy down range, even beyond 40 yards where necessary, to get the job done on a spring gobbler. That would mean No. 4s. Particularly when hunting late spring, when the woods have leafed up or when hunting woods with ample limbs and brush that might obstruct some pellets. The heavier shot can punch through those minor obstructions (if too thick, don’t shoot no matter what is loaded in your shotgun) much easier than the smaller shot.

Unfortunately, the decision isn’t that simple. Because No. 4s are larger and many turkey chokes extremely tight, some guns simply don’t pattern the larger shot very well. Pellets compress against each other at the choke, crunch into one another and can bounce off of each other leaving ragged holes in a pattern that can cause the vitals to go largely missed.

Before settling on a shot size, it is critical to pattern your gun with the load you plan to use first. Try shooting at ranges both short and far, particularly if you're using Winchester’s Longbeard XR, which utilizes Shot-Lok technology, to deliver devastating patterns out to 50, even 60 yards depending on your shotgun’s capabilities.

When hunting early season with little green-up, open areas or simply looking to put as many projectiles into the air, No. 6s are ideal. More guns pattern the smaller shot better and out to typical turkey killing ranges, the high pellet count can literally swarm a turkey’s vitals with a combined abundance of energy. When patterning your shotgun, however, it’s critical to know where your pattern densities start to fall apart. At that point, your killing effectiveness will also drop drastically.

If neither shot options works well with your gun, there’s always the compromise—No. 5s. But even with that, pattern your gun first and go with whatever load delivers the most even, consistent patterns across the head and neck area of your turkey target.