Several blogs ago, I wrote about how I wasn’t a likely candidate for a $500 Sous Vide cooker. Well, I still haven’t invested in a high-dollar unit, but I’ve been using the snot out of a couple of lower-priced models. In case you haven’t heard, sous vide (pronounced sue veed) is a cool kitchen technique that will turn tough cuts of meat into something that’s backstrap tender.

It’s basically a cooking method that slowly and evenly cooks things like venison steaks and roasts and holds them at a precise temperature. You know how you like how your slow-cooker cooks your dinner while you’re away from the kitchen all day? It’s pretty much the same with sous vide, only different. A slow-cooker uses relatively low heat and moisture to transform lesser cuts into pot roast tender stews and more. If you have a tough hunk of meat, throwing it onto a hot grill won’t do anything to make it more tender.

Preventing cookies from being stored on your device may interfere with your ability to view video content.

You can adjust your cookie setting by clicking the button below.

Oh sure, it’ll look just like a steak on the outside, but it’s still tough. Cut the same steak into cubes and slow-cook it for several hours with some vegetables and stock and the sinewy meat is magically changed into spoon-tender bites.

With Sous Vide cooking, meat is seasoned and sealed in a vacuum bag or heavy-duty zipper lock bag. The bag is placed into a water bath that is held at whatever temperature you select, and the temperature remains the same, within a half a degree or so, until it’s ready to either serve or sear. The sous vide machine circulates the water so that there are no hot or cold spots. You won’t get any searing out of sous vide cooking. With a sous vide unit, it’s best to undercook meats by 5 or 10 degrees and then, after it has been rendered tender, it can be slapped onto a hot grill or into a skillet to brown the outside. 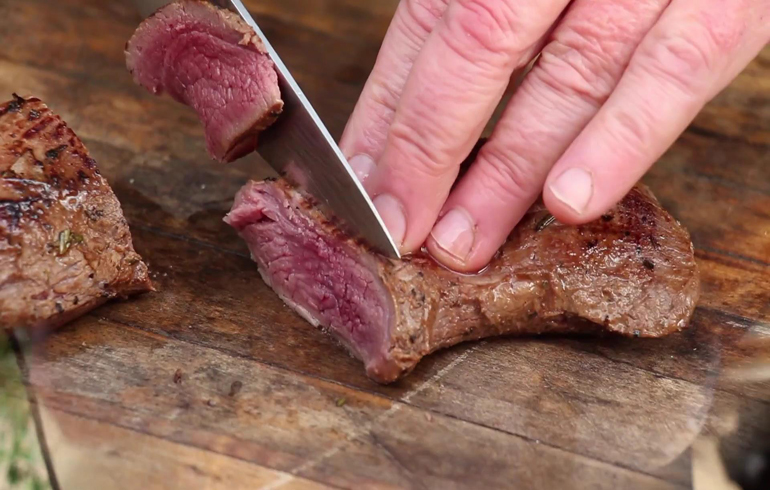 Sous Vide units are sold in a variety of sizes and shapes. From a commercial unit that will set you back a couple thousand dollars to home products that cost less than $150. I alternate between the typical immersion unit and a new product that is both a slow-cooker and a sous vide cooker. Do keep in mind, that using a conventional slow-cooker full of water will not maintain the controlled temperature of a sous vide unit. I know because I’ve tried it and, although the results were OK, it’s not the same. I call it a “redneck sous vide.”

So what is it about sous vide cooking that makes tough meats tender? Cooking meat for hours at low heat will break down connective tissues over time. Once tender, the meat can be held in the sous vide bath for hours. When you cook a steak on a grill, the meat is obviously going to be more cooked on the outside where it’s more exposed to the heat and less cooked at the center. When a steak floats around in a sous vide bath for several hours, it not only gets tender and flavorful, but it retains its shape and may actually swell up a little. Imagine a steak that is perfectly cooked from top to bottom. The temperature throughout is exactly the same. But it lacks the delicious seared meat texture that you get from cooking over an open flame or in a hot skillet. That’s why it’s best to undercook it during the sous vide phase so that it can be seared after the sous vide has done its job.

The video is a clip from The Sporting Chef show on Sportsman Channel. I put the sous vide to the test with a normally tough venison eye of round.