Dealing With Elevation While Shooting

While for many hunters, the areas they hunt are largely flat, wooded land with shots close or at worse, down a field from a treestand perched about 15 feet off the ground, considering the angle of their shot is of little concern.

But where the country opens up and mountains rule the terrain, most certainly out West, taking shots uphill or downhill, and sometimes at fairly long ranges, definitely comes into play. Compound that with the interest—and modern capabilities—of shooting longer ranges courtesy of technological advances in optics, firearms and ammunition (think Winchester Big Game Extended Range) and you have a world where considering angles when shooting becomes critical.

Long ago, the belief was that if you shot uphill your bullet would shoot high and if you shot downhill, it would hit low. Not sure how that myth originated, but the reality, gravity exerts its greatest influence over the trajectory of a bullet when it is shot across a level area as the gravity is pulling equally at the bullet along the entire length of its travel. Shooting uphill or downhill, that effect is lessened, thus when shooting uphill or downhill—it doesn’t matter—a bullet will hit higher. This is most commonly witnessed among bowhunters who practice almost exclusively shooting from the ground at targets and then when in a treestand during hunting season, overshoot a deer. 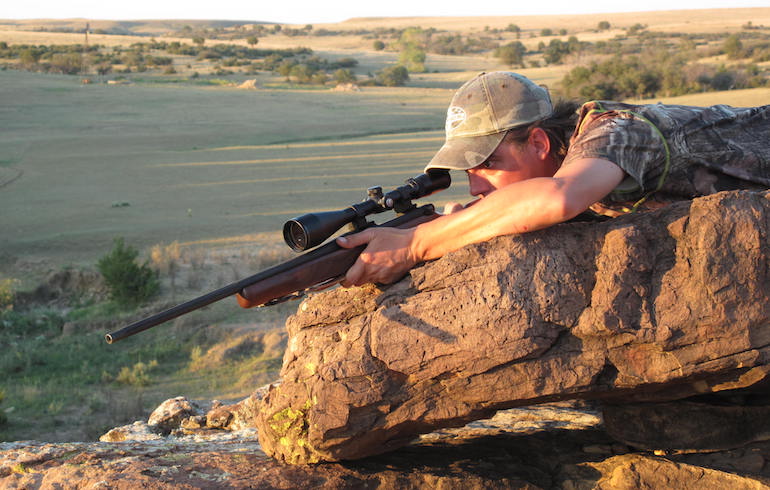 So at what point does a hunter need to consider and allow for the effects of shooting at angles? With the majority of game animals taken at less than 100 yards, not at all. Hold center of target and even at a fairly steep angle, your shot should hit center of mass. Out to 300 yards or less, unless the angle is steep, again, most hunters should be fine shooting center of the vital area.

While there are a number of ways to determine the proper range and aim when shooting at an angle—such as primitive charts that show the angle with relation to your bullet drop—a modern range finder is the best tool a hunter can use. It quickly and readily calculates the true distance to the target, taking the range of the target into consideration. Hit it a button and it gives you your range.

If you prefer to go old school, use the following widely utilized calculations upon determining the angle of your shot: