Shotguns for Self Defense at Home

When it comes to choosing an ideal gun for home defense—it’s hard to argue against the benefits of a shotgun.

Unlike a handgun, with its short sight plane, a longer shotgun is much easier to aim, particularly by less skilled shooters during a stressful moment. A shotgun also throws a wider pattern than a single projectile, allowing for poor aim, likely to be made poorer by a stressful situation such as a home break-in or defensive situation.

And unlike a centerfire round shot from a rifle, shotgun loads tend to have less velocity limiting the likelihood of pass-through shots in walls in a home.

So what should a person look for when considering a shotgun for home defense?

While 12-gauge shotguns set the standard for the most popular size chambering today, the larger weight, length and power of the load are hardly necessary for home defense purposes given the offering of dedicated ammunition for the purpose. Twenty-gauge shotguns are smaller and lighter making them more nimble and easier to handle in the limited space inherent in a home environment, as well as easier to handle by smaller stature shooters such as women. The lighter load is plenty adequate for close-range defensive situations, yet doesn’t punch with so much recoil that it should punish sensitive shooters. Remember, part of being prepared to defend yourself is to practice as often as necessary. A 20-gauge makes practice more pleasant for sure.

When it comes to what action, follow-up shots would be absolutely necessary in a defensive scenario, so go ahead and toss the single shot out of consideration. For its limited capacity, the venerable double-barrel (either side-by-side or over/under) are optimal either. Merely working a pump-action shotgun and taking it to battery generates an ominous, yet distinctive sound that may be enough to send intruders scurrying without a shot ever needing to be fired. Pump-actions can hold on average three to five shells, same as a semi-automatic, and are reliable. Working one when under stress may be more challenging without extensive practice, however. A semi-auto, on the other hand, makes working the shotgun as easy as pulling a trigger when confronted with a dangerous situation. Whether a gas-operated or recoil-operated semi-auto, the action tends to siphon off some recoil making it kick less than other types of actions as well.

Most of today’s shotguns come with interchangeable chokes, but for a home defense shotgun, a cylinder bore or improved cylinder choke tube will allow the shotgun’s pattern to spread more quickly out of the muzzle. This is preferred so as to make it less important to have completely precise aim—something else that can be hard to do when under the stress of a possible home invasion or break-in.

Lastly, perhaps one of the most important aspects of choosing a good home defense shotgun is choosing a good home defense load to fire through it. Winchester’s 20-gauge Defender segmenting rifled slug, which breaks into three equal segments that help compensate for aim error, yet still impact the target with critical penetration. Winchester also makes other Defender loads for both 12-gauge and .410, which feature combinations of slugs, shot and discs. 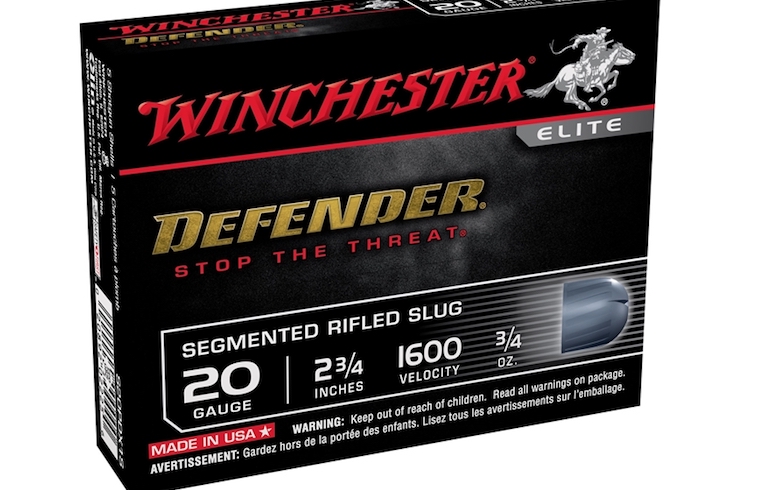