Sometimes Your Best Hunt is Near Your Backyard

When you think back on your most memorable hunt, where were you? Do your memories take you out of state? Or maybe they take you right to the backyard.

For me, most of those memories were formed in my home town in Western New York; and more importantly with my dad.

Every year, my dad and I put out trail cameras in hopes of getting pictures of good bucks. This year was no different. After pulling the cards and scrolling through hundreds of pictures, I came across a tall 8 with good mass.  At that moment I knew which buck I had my sights set on for the season.

New York bow season came with unseasonably warm temperatures which made it feel more like summer than fall. Thankfully the temperatures began to cool the second week of November and the rut was kicking in. I began getting pictures of bucks moving during daylight hours and was able to get a video of my buck strolling by my treestand. The problem? He walked under my stand in the middle of the day on a week day, while I was stuck at the office working. 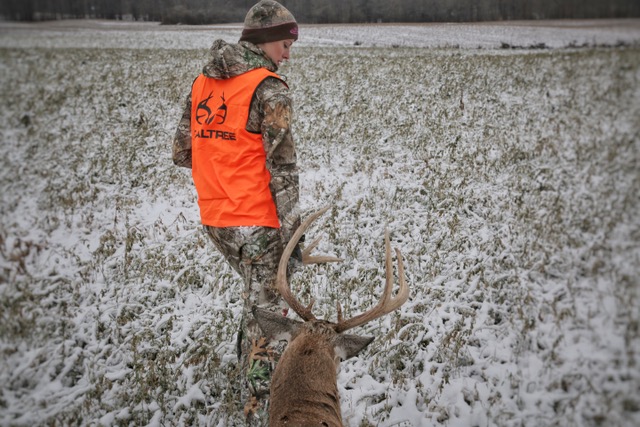 Luckily, opening weekend was just around the corner and the weather was looking good. My gear was ready and the 6.5 creedmoor was sighted in. I practiced with this rifle all summer and was excited to put it to the test. I paired it with Deer Season XP ammunition and was confident that the larger polymer tip would get the job done.

Opening weekend finally arrived. Sunday started off with snow which turned into a combination of wind and icy snow in the afternoon . My favorite deer hunting weather. Going with my gut I decided to bring along my shooting sticks and hunt from the ground in natural cover.

With about a half hour left of shooting light the deer began to move out from the woods and made their way to the field edges. I spotted a couple of doe, watched them for a few minutes and continued to scan the area. Just then I spotted a buck to my right, I pulled up my rifle to look through my scope and there he was. He was standing broadside at 58 yards, my heart was pounding and I was studying his every move.

He was in the crosshairs, my moment had arrived.

I looked down at my watch, then back at him before putting down my gun. I had run out of time. I walked back to the truck that evening with a mix of emotions; high hopes and also kicking myself thinking maybe he was standing there earlier but I didn’t see him because I was watching the doe.

My weekend came to an end but I kept thinking back on my encounter. I was determined to get a chance during daylight hours. Keeping an eye on the wind, I looked at the forecast: it was calling for my favorite hunting weather. Winds from the SSW and snow. So, I did what any hunter with buck fever would do…I talked to my boss and asked if I could leave work early that Wednesday.

I got home around noon, made a quick bite to eat and heading out to woods. Once again I set up on the ground in natural cover. I was there an hour before a doe walked into the field at about 70 yards, I scanned the wood line through my binoculars and saw antlers. Watching the antlers intently until I was able to get a clear look. As soon as the buck broke through the brush I knew he was the deer I had been after. I readied my rifle while watching him as he walked into the field following the doe.

I settled my crosshairs, took a deep breath and pulled the trigger!

As the shot rang out, I watched as the buck mule kicked and took off running back in the direction from which he entered. I heard crashing but couldn’t see him once he disappeared into the timber. I walked over to where he was when I shot and looked for blood. There wasn’t any.

“Did I hit him?” I felt solid. I heard crashing, was that because the timber was so thick or did he fall? He mule kicked. Or was that just in my mind?

I followed his tracks into the woods, my mind running wild with thoughts and questions. Then I looked up and there he was about 40 yards from the field. The Deer Season XP hit its mark. 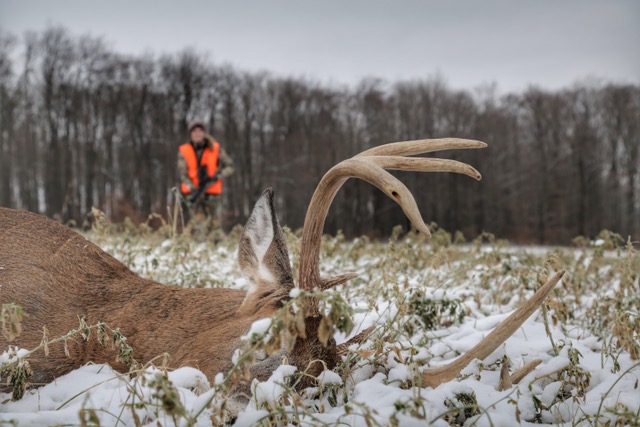 Immediately, I called my dad to tell him.

He is always the first one I tell about all of my outdoor adventures and the first one to meet me in the woods to help load up my deer after a successful hunt.

This hunt is one I will cherish for years to come. All hunts are special, but being at home and having my dad to share the hunt with in some form, now that’s a special day.