As January settles in, many people are already getting antsy to get back out hunting. Though I’ve been spending most of my days hunting predators, I’m pretty excited for one last whitetail hunt of the year.

This time, I won’t be the one hunting however. Two young South Dakota boys will be taking part in the late-season youth-hunt for does. Quite frankly, I can’t wait! South Dakota participates in the Youth Deer Mentored Big Game hunt. I’m a huge proponent of programs such as this.

Preventing cookies from being stored on your device may interfere with your ability to view video content.

You can adjust your cookie setting by clicking the button below.

As January settles in, many people are already getting antsy to get back out hunting. Though I’ve been spending most of my days hunting predators, I’m pretty excited for one last whitetail hunt of the year. This time, I won’t be the one hunting however. Two young South Dakota boys will be taking part in the late-season youth-hunt for does. Quite frankly, I can’t wait! South Dakota participates in the Youth Deer Mentored Big Game hunt. I’m a huge proponent of programs such as this. This program allows youth who have NOT yet taken a hunter safety program to try it out, However. they must be at least 10-years old, but not older than 15 at the time of hunting. They must have a parent or guardian who is a resident of South Dakota AND have taken the hunter safety course. Programs like this which is kind of a” try before you buy” type of setup are really great because it gets kids excited about hunting. We lose so many kids to sports, video games, and other activities. I’m a firm believer we need to re-think the way we get kids into hunting and programs like this are doing a wonderful job. 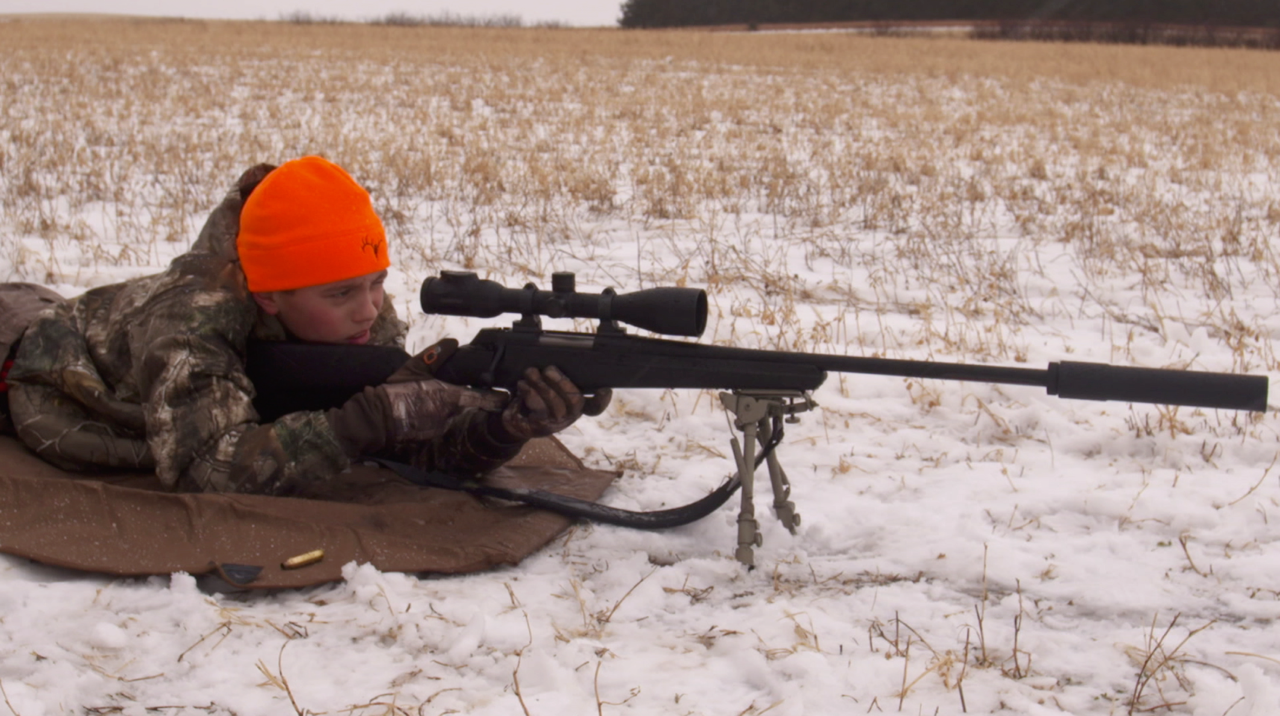 When it comes to the parents and mentors there are several things to keep in mind. Always make the experience fun. Deer may or may not cooperate, but there are easy ways to control most of the other aspects of the hunt. Bring food, snacks, and drinks so hunger or thirst doesn’t become an issue on the hunt. Try to choose the best times of the day to hunt so the kids can experience peak-action. Always try to hunt during the best weather possible, but if the weather turns south ensure the kids are prepared. If they get cold or wet, let them sit in the truck and warm up. 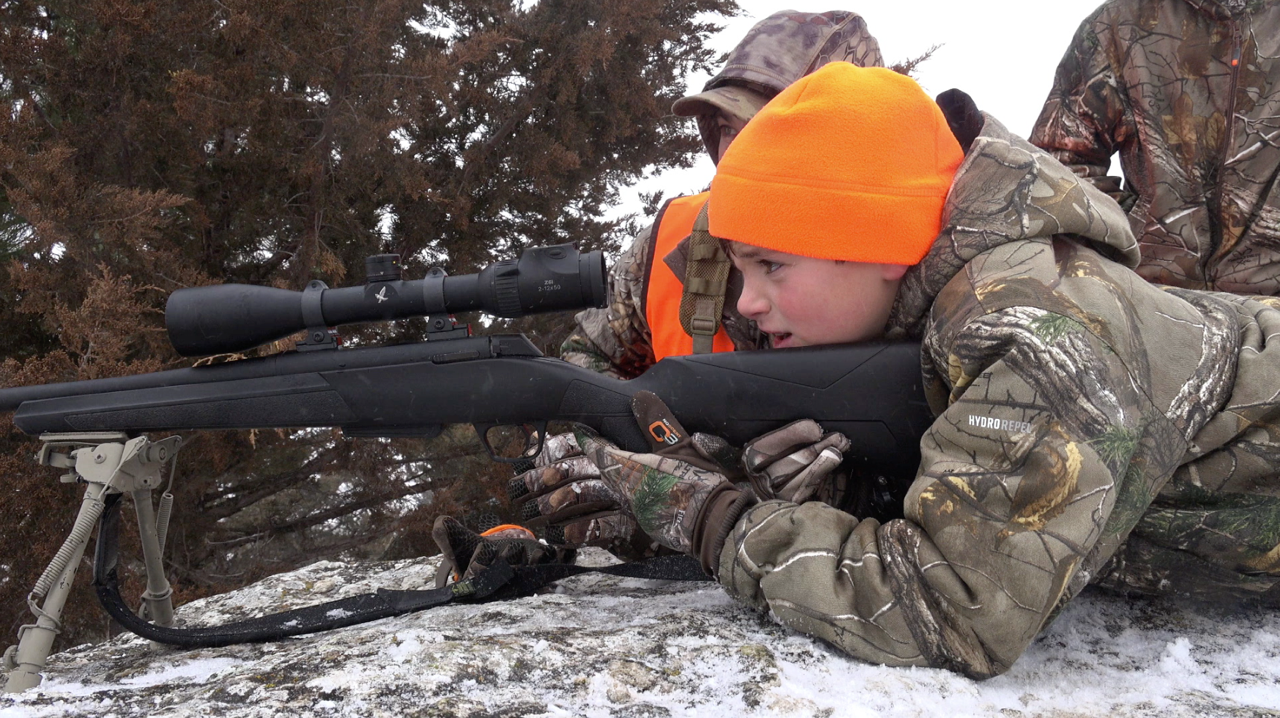 This past weekend I accompanied two South Dakota youth hunters to film and experience their hunt. We were heading out on the second to last day of the season – unfortunately, a snow storm was in the forecast. Noah and Judd were going to be hunting, but Noah’s younger brother Max was going to join in on the fun even though he was a year too young to hunt. Before the hunt began a snowball fight kicked off the fun. Then, each of them took turns practicing shooting their Winchester XPR using Deer Season XP in a .243 with 95 grain Extreme Point. We put a metal coyote target out at 150-yards with an orange dot on the vitals. All three of the kids took turns shooting and using metal targets is a great way to give kids instant gratification after hitting their mark. I also had my Silent Legion suppressors on the guns to ensure the noise and recoil was reduced which the kids loved. 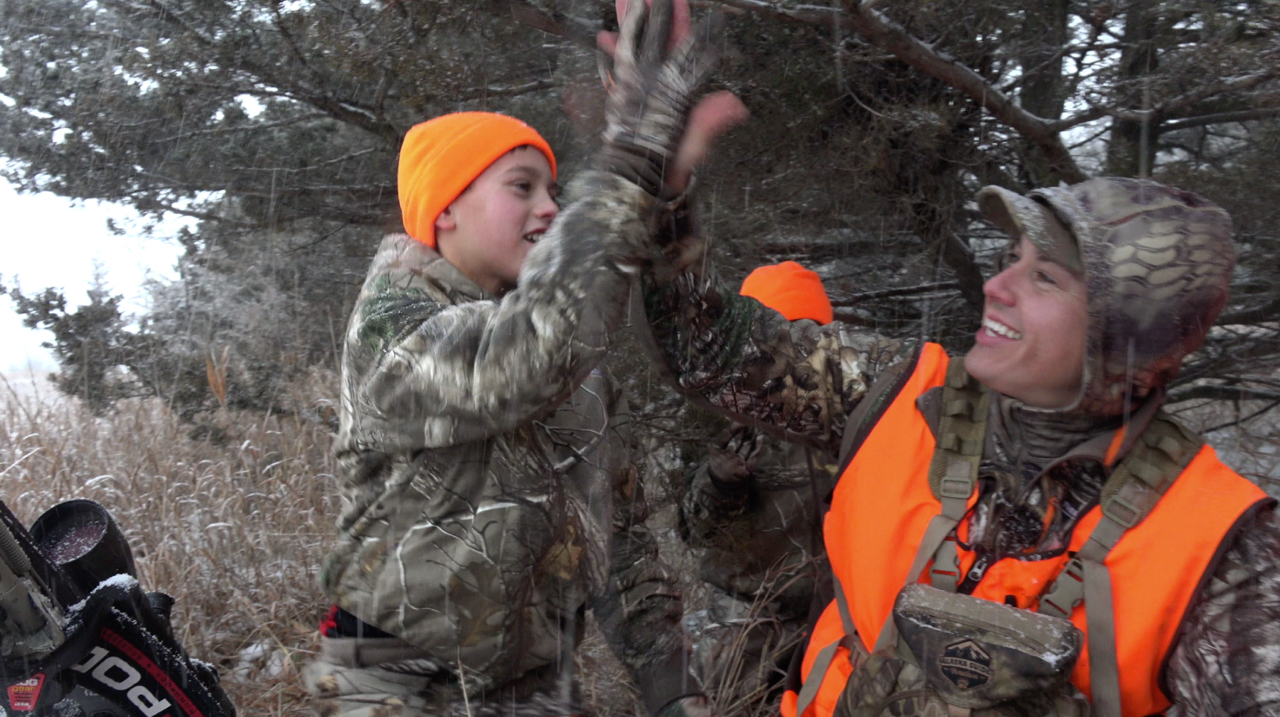 Once everyone was comfortable, we headed out. Judd was up first for his first-ever deer hunt. The weather was already starting to turn, we spotted deer all over the place. We were hunting with some friends in the area from Wild Wings who were kind enough to let the two kids come in and take late season does. For Judd’s deer, we wanted the most controlled setup as possible so we were looking for deer standing in a field where we could setup. After some walking, we spotted a couple deer out feeding in a cut bean field and setup for the shot. Judd was able to prone out. When he was ready, he made a perfect shot at 140-yards and dropped the deer right in her tracks. To see the feeling of accomplishment and pure joy come across his face was absolutely priceless. The boys all helped drag it out and we had one doe down and more to go!

Next up was Noah. Snow was coming down even harder. The light was starting to fade and we saw a group of deer out in a field. The shot was a little too far so we snuck around the back side of the trees and popped out on the edge within shooting distance of the deer. As deer started to come our way, they spooked once they hit about 60-yards. Instead of getting frustrated, we just sat it out and it didn’t take long and they started coming our way once again. A doe was out in front; this is the one Noah had his sights on. She just wouldn’t turn broadside, but Noah knew he needed her to turn for a safe shot. As the doe was standing there I heard him whisper that the doe behind her was broadside and in range. Just as I moved the camera off the close doe and onto the second doe, he made a perfect shot. She went down right in the field. Both kids made perfect shots, we had a fun afternoon of hunting, and

Max was excited to be a part of the entire hunt and his job was going to be grilling back straps when we returned home.

As hunters, it is our job to keep exposing new people to the sport and do our very best to make each and every one of these experiences as positive as possible regardless of whether or not the animals cooperate. 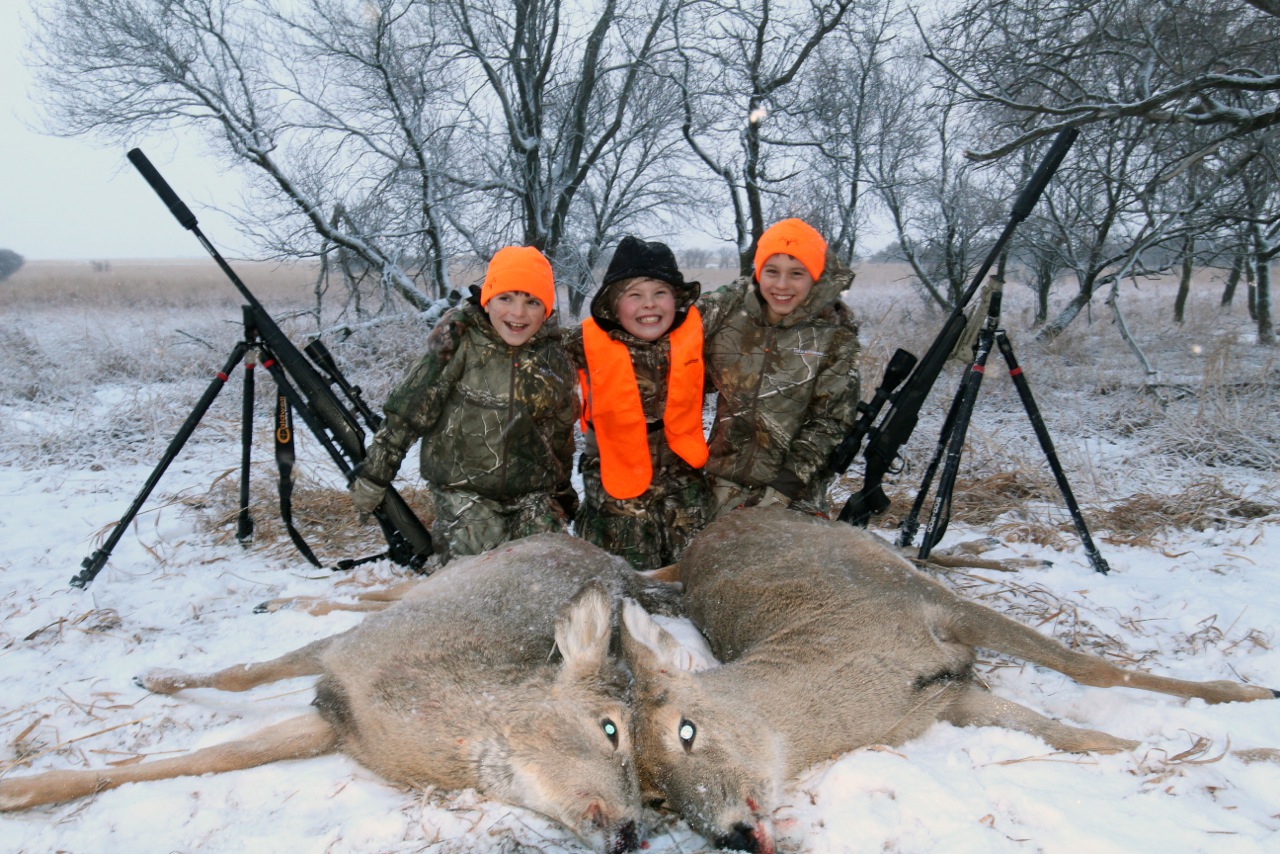