Finding The Right Combination of Choke And Turkey Load

Most turkey hunters know they have to “pattern” a combination of chokes and shells to find the ideal, long-range turkey medicine for their pet shotgun. But this is expensive and hard on the shoulder, no?

No! At least not if you do it the smart way. To save wear and tear on your shoulder from those big kicking 12 gauges, strap on a PAST or Kick Killer (from Buffalo Arms Co) shoulder recoil pad and/or shoot from a Caldwell Lead Sled. You can slip a bag of lead shot between your shoulder and gun, but this extra length could mess up your aim.

Now, to save those expensive Long Beard XR and Double X turkey shells, here’s my little secret for punching paper targets at 60, 40, 30 and 20 yards — with ONE shot: Post your paper turkey target at 60 yards and aim your empty gun at it (Action open! Trigger lock or cable lock to prevent firing! And no shells within reach. I wouldn’t even take them out of the car at this point.) Leave the gun secured in that position on the bench/sandbags and line up another paper target at 40 yards so it, too, sits right under that front bead. Then post one at 30 yards and a final one at 20 yards. You now have four targets all perfectly lined up under your aim. 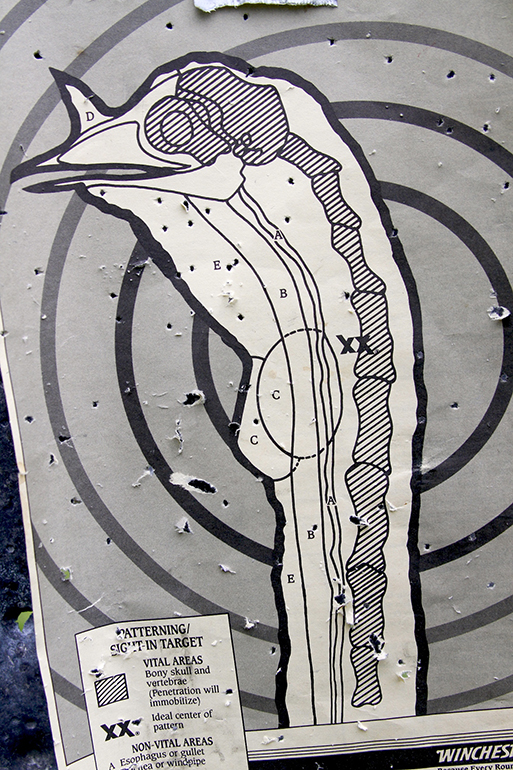 Now clear the range, unlock the gun, load a shell and fire at the head of the 20-yard target. The pellets will easily punch through each paper wall, the pattern spreading normally as it progresses down range, and with one shell you’ll see how the gun patterns out to 60 yards.

Do this with several chokes, shell and shot sizes until you discover your winner. 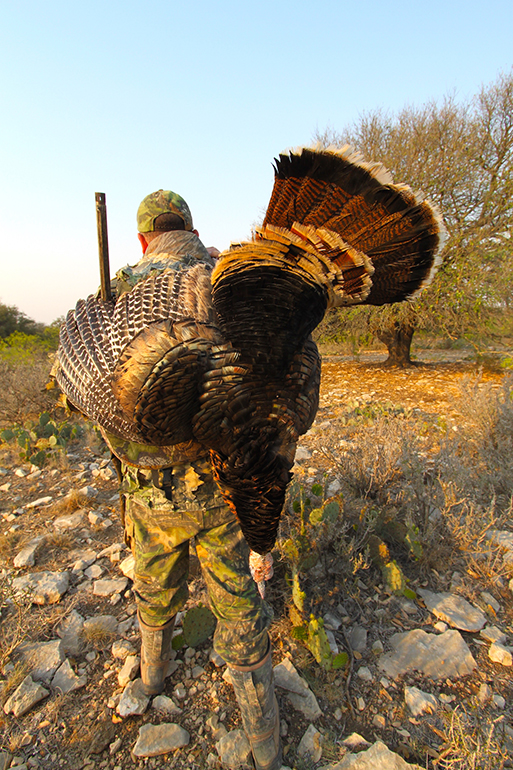 Here’s another tip: match pellet size to bore size as well as to desired downrange performance. The smaller the pellet (#6 is smaller than #4 which is smaller than #2, etc.) and the lighter its specific gravity (steel is lighter than lead) the lower its retained energy downrange. But, and this can be a significant “but,” larger pellets don’t flow as smoothly as smaller pellets down narrow bores. As pellet diameter increases, pellet deformation tends to increase with it, and that can widen patterns downrange. Going up to #4 in a 12 gauge shouldn’t be a problem, but might be in a 20 gauge.

Traditionally #6 lead is considered powerful enough to reliably penetrate a turkey’s vitals out to 35, maybe 40 yards. Then it’s time to step up to #5 or #4 shot. The downside to larger pellets is lower numbers of them in the swarm. Super tight turkey chokes can sometimes compensate for this, so try those. This is why patterning is important. You just never know what a particular gun, choke and shell will do until you see it with your own eyes. At extreme range I’d rather put eight #4 pellets in a turkey’s head than 12 #6 pellets because the #6s might not penetrate sufficiently.

When you find a shell that patterns to your liking, double check by firing several more for a good average. A dozen pellets in the kill zone at 60 yards from one shell could be a fluke. You don’t want to hunt with a fluke. Look for consistent, repeatable and dependable.

Many of us have witnessed the infamous “golden pellet,” that brained a turkey at 70 yards or some equally ridiculous range, but who wants to depend on that kind of luck? Do your homework to discover your gun/choke/shell dependable distance and hunt within it. That’ll make you a turkey pro.