Consider this the deer hunter’s version of the two-minute drill as you enter the final weeks or even days of deer season.

In many areas across the whitetail’s range, the winter is turning cold, maybe even some snow is on the ground, and that buck tag is still burning a hole in your wallet because it’s yet to be filled. Here are five tips to help you finish the season strong.

Hunt Midweek – Think you’ve become a master of patterning deer? By the second or third week of the season, you can bet the whitetails have patterned hunters, too. Most likely even better than you could ever dream. With the bulk of hunter pressure taking place on weekends, put in for a few scattered vacation days and hit your favorite hunting spot on a Wednesday or Thursday, at least a couple of days after the crowds have headed back to work and deer are feeling more relaxed. 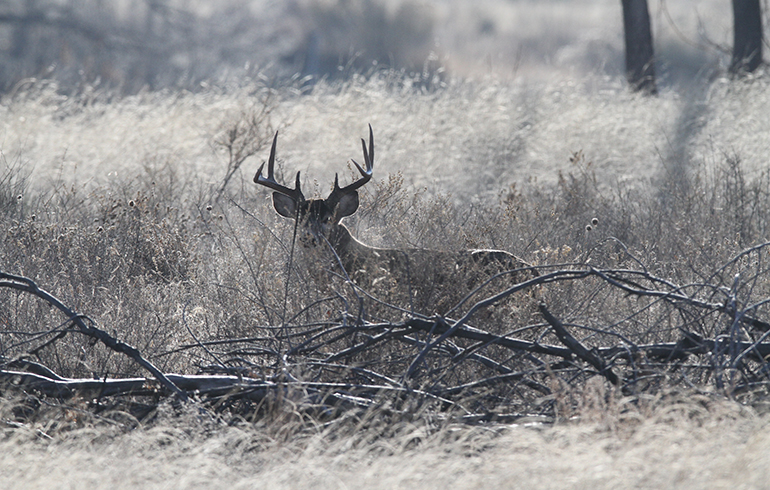 Get Tight – Surviving bucks, even does, are sitting tight right now in the thickest, nastiest cover they can find. It’s the only place they feel safe this time of the season. You still can’t afford to just blunder into these hidey holes without major risk of blowing deer out and pushing them into even deeper and different cover, but you should get tight. Circle cover during a high, swirling wind to hide the sound of your approach and confuse the deer on the direction of your scent. Locate the most worn path in and out of the cover, set up downwind of it long before sunrise and hope to catch a buck slipping in those first few moments of daylight.

Heat Seekers – Cold weather can kick start deer movement, but it isn’t necessarily because deer like the cold any more than we do. When the mercury plummets, they must move to feed and generate body-warming energy. They will also seek out bedding areas that afford them some warmth. Look for beds sitting tight in cover along south-facing slopes where they can catch more sunlight during the day. Glass these slopes and look for a deer to stand and stretch and then put a stalk on him. The same goes for young cutovers where cover is only a few feet tall. It will be enough that deer will feel secure bedding up and moving in it, but not so tall that you can’t catch them standing or walking. Find a good perch on the edge in a tree-stand, glass vigilantly and go with a good flat-shooting caliber rifle such as a .308 Win. or .300 Win. Mag. or if hunting where limited by shotgun, go with a hard-hitting, long-range slug such as Winchester’s Dual Bond. The goal is to be able to reach out into the cover as far as possible without entering it yourself.

Take Advantage of Special Seasons – So general firearms season has closed. Doesn’t mean you should quit just yet. Many states offer late archery or muzzleloader seasons, which also tends to translate into fewer hunters in the woods. Deer may begin to relax a little, which means a higher chance of success every time you hit the woods. Got an area not being hunted that you have access too, let things ride and keep out of them as long as you can to allow deer patterns to return to normal. Then hit food sources on the leading or subsiding edges of a cold, nasty frontal system and you’re apt to hit pay dirt. But don’t wait too late if you’re seeking a trophy. Depending on where you live, bucks may begin dropping antlers as early as late December and more commonly in late January into February.