Mixed bag – a Stew Pot for All

2007 marked the 400th Anniversary of the first English-speaking settlement in the New World. I know…it seems like only yesterday. Back then, I was invited by National Geographic and Virginia Tourism to Jamestown to see what I could do with some of the cooking ingredients that were on hand 400 years ago.

My utensils included a fire pit for heat and an assortment of iron, clay and wood pots. It’s not much different than deer camp today, except for the coolers full of ice, sound systems, propane stoves and 500-watt lighting. The few pigs that were brought over the Atlantic Ocean stayed fairly active, growing in numbers to a thousand or more that were maintained at nearby Hog Island.

The best part of the swine population boom – bacon. OK, maybe not bacon exactly as we know it today, but pretty close. Game was plentiful and well-fed. They included wild turkeys, whitetail deer, rabbits, turtles and, when things got a little tough – lizards, snakes and any other protein unlucky enough to get caught. 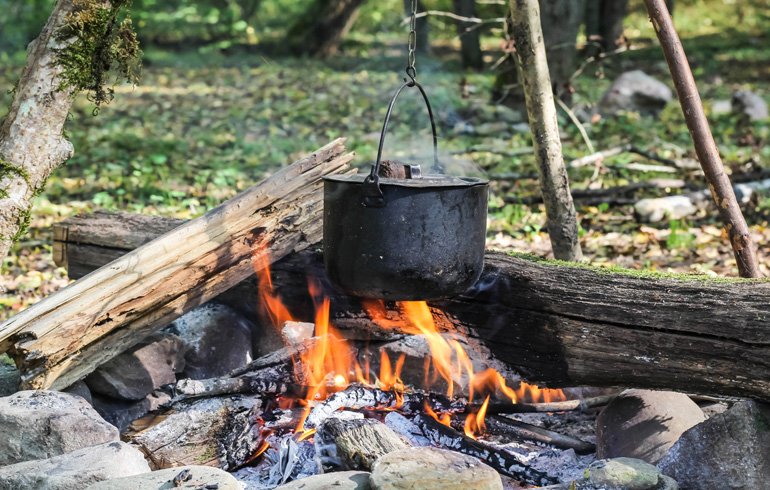 Long before the Crock Pot, Jamestown settlers made potage which, by definition, is a thick soup made from boiled meat, vegetables and whatever else gets tossed into the pot. Hopefully, by the time you got back from exploring the new country, somebody at camp kept the fire burning. After several hours of cooking, just about anything will turn into a thick, mushy stew. While at Jamestown, I cooked an assortment of game meats – quail, dove, deer and rabbit. You can use whatever meat is available, wild or domestic. If you don’t feel up to cooking over wood coals, I’d recommend a slow-cooker.

salt and pepper to taste