Many states or urban/suburban hunting zones within states are relegated to “shotgun-only” designations during whitetail seasons where centerfire rifles—the main method for taking deer across much of its hunting range—are not permitted.

One of the main reasons for this requirement—at least in many areas is the perception that the limited range shotguns possess when compared to rifles makes it safer when hunting is taking place in close proximity to human-inhabited areas. Centerfire rifles are not permitted in the big buck states of Illinois and Iowa, as well as all or portions of East Coast states like Delaware, New Jersey, Maryland and Virginia. Limits exist in many other areas, too.

While buckshot is still used in a number of southern states, primarily where hunting deer with dogs is still permitted, for the most part, slug guns are required or used in these “shotgun-only” hunt areas. But most state regulations (always check the specific regulations for the area you hunt) permit the use of a modern muzzleloader as well. Given the two options, which is best for today’s deer hunter

Shotguns – Slug gun accuracy, courtesy of precision-made rifled slug barrels and improvements in ammunition by companies such as Winchester, has grown by leaps and bounds in the last 10 to 20 years. At one time, Foster-style slugs, which would create their own sort of twist down the barrel when fired, were great for shots out to 100 yards or just over that distance, almost doubling the reliable range of most heavy buckshot.

Today, whether shooting a 12-gauge or a 20-gauge, with a good sabot-type slug such as Winchester’s Dual Bond or XP3 loads, fired through a rifled barrel and with the hunter looking through a quality optic, reliable shots out to 150 yards are easily achievable. Shots out to 200 yards are doable with ample practice.

With a shotgun, at least when shooting a pump or semi-auto, hunters often have three to five shots at their trigger-squeezing disposal should a rapid follow up shot be required to finish the job.

Muzzleloaders – The accuracy of today’s inline muzzleloaders far exceed what was conceived when the movement began in the late 1980s and 1990s to begin implementing special “primitive weapons” seasons. Back then, most muzzleloaders used a small percussion cap to ignite the charge unlike the much hotter and reliable 209 primers common today. Barrels and loads also lacked some of the engineering that goes into rifles today with quality muzzleloaders now capable of virtual centerfire-type ranges out to 300 yards and in the hands of an accomplished shooter, sometimes even farther. But you are limited to only one shot, which any proud marksman will say is all a hunter should need if he knows what he is doing. Muzzleloading also nets the hunter a cheaper per shot cost when factoring in a charge of blackpowder, Pyrodex or Triple 7 and a bullet, when compared with a manufactured high-end slug. 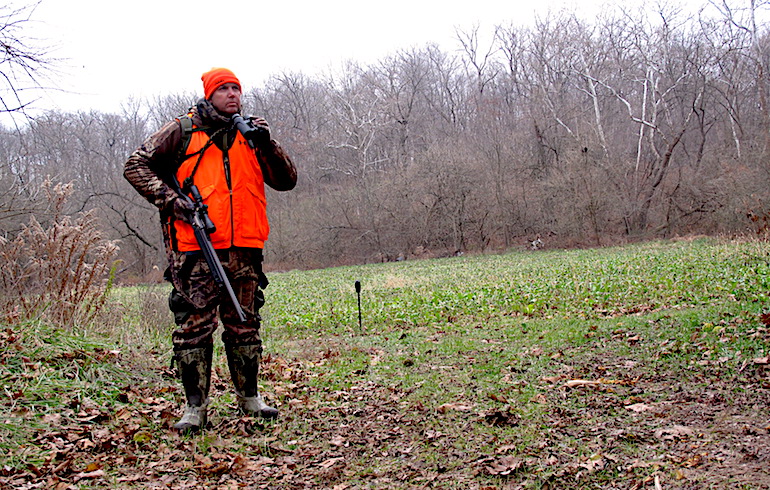 For hunters sitting stands over open areas, where a long, but well-aimed shot will be the norm, the muzzleloader clearly provides the edge. If ranges are limited to 150 yards or less and/or hunters are engaged in the occasional deer drive where deer may be moving and follow-up shots required, the slug gun is the clear choice. Beyond that, it really comes down to personal preference.